Did you know that art and science of aromatic medicine is more than six thousand years old?
It is amazing how history can be easily forgotten!

Ancient Egyptians used some of the oldest known oils, like Frankincense, Myrrh, Elami and Juniper, for embalming, healing preparations, perfumes, massage, and skin care. The oldest identified medical records - Ebers Papyrus, which dates back to the 16th century B.C., mentions Frankincense oil and the use of this essential oil for several hundred prescription and recipes. Some Ebers Papyrus herbal formulas for problems such as eye inflammation called for Myrrh, Cypress and Frankincense Oil. Other recipes recorded included a blend for deodorant using aromatics, and treatments for depression and nervous disorders. No doubts that Frankincense oil was highly valued by many early cultures and legend says Frankincense oil was one of the three gifts that wise Magi from East brought to baby Jesus.

The use of Sandalwood oil has been mentioned numerous times in ancient Sanskrit, Chinese, Jewish, Buddhist and Hindus texts; almost every belief system has a use for it. Sandalwood oil, resin and incense were used in religious ceremonies, and the wood was often used to carve deities and to build temples.

In ancient Greece, Hippocrates recommended aromatic baths and massage with oils of Marjoram, Cypress and Myrrh. In China, essential oils of Rose, Jasmine and Chamomile were used as tonics.

Scent, hygiene and beauty were as important to the ancient Romans as they were to the Egyptian Empire. The Romans famously used great amounts of frankincense and myrrh in their perfume while rose water was used mainly for bathing and skin care.

Ancient Persia undoubtedly had a huge impact on the history of rose water. By 810 BC Persia had become one of the biggest centres for rose water production, exporting to numerous countries across the Middle East and to China. It wasn’t until sometime after the year 1010 when Avicenna, refined the process of distillation by inventing a machine with a coiled cooling pipe that allowed for more effective cooling. Because of this, the focus eventually shifted towards more emphasis on true essential oils and their uses.

The therapeutic use of essential oils began its revival in 1910 when Rene-Maurice Gattefossé, a French chemist, crafted the word "aromatherapy." He had already begun to study the effects of essential oils, when he burned his hand in a laboratory explosion. He
immediately immersed it in Lavender oil. He was amazed at how the pain was relieved. Gangrene was prevented and his hand healed without scarring. Based on fact that Lavander oil helps healing, French surgeon Jean Valnet used essential oils to help heal soldiers’ wounds in World War II, proving the medical benefits of aromatherapy.

Today in Europe many doctors practice aromatherapy, and essential oils are readily available in pharmacies. In the United States and Canada, aromatherapy is widely used by massage therapists and is gaining recognition among estheticians, nurses, therapists, and doctors.

For centuries, essential oils were accepted for their therapeutic value. Yet with the progress of modern medicine and the scientific laboratory, natural remedies were pushed aside in favor of synthetically made chemicals. Even today we are still trying to unfold the secrets of ancient’s civilizations, reviving aromatherapy and realizing that it is one of the most powerful medicine in the World.

Why do we favour Essential Oils at Galena Pharm? 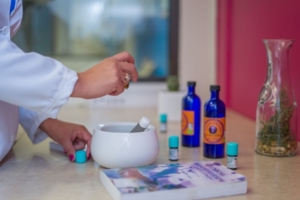 According to Chinese medicine, essential oils in general are considered medicines for the Shen ( Spirit ) , the spiritual essence that resides in the heart and governs our consciousness.

Essential oils have a profound effect on the deepest levels of human body and psyche powerfully enhancing positive mental and emotional states.

Our essential oils are pure, natural and unadulterated verified by Certificate of Analysis test.